Bangladeshi children living in east London have a much higher risk of poor nutrition and obesity than the average child in the UK. The British-Bangladeshi community is much more likely to develop longer-term health problems and chronic diseases as a result such as heart disease, poor oral health and diabetes.

Previous public health efforts to address this issue have tended to consider all South Asian populations together, which limits understanding of the relevant cultural and social factors that would influence whether a health intervention is accepted.

NEON (Nurture Early for Optimal Nutrition) is a community-based approach to help improve nutrition when a child is 6 months-2 years old, a key time in their development. The study trained community members as ‘community researchers’ to recruit members of their community, interview them, and analyse and interpret the findings. This included introducing female health workers into local women’s groups, based on the WHO-recommended Participatory Learning and Action cycle.

Some 141 people from the British-Bangladeshi community in Tower Hamlets in East London were interviewed. This included parents and grandparents of children aged 6-23 months, as well as community leaders and health professionals.

The model underpinning this approach is a proven model from South Asia. It is the first time that a developing country intervention has been adopted to improve nutritional outcomes and applied to a relevant ethnic community in the UK.

The second phase of the of the NEON project will include a feasibility randomised controlled trial and development of an intervention for other South Asian communities across more boroughs in East London. Funded by the NIHR Academy (£805,854), the next phase aims to optimise infant feeding, care, and dental hygiene practices among South Asian infants under 2 years old.

The study identified infant feeding and care practices, and features of this community and environment, that could be targeted to improve children’s health. This included:

The NEON film has been included in The Birthing a Better Future Art & Science Exhibition, aimed at raising awareness of the crucial first two years of life, currently touring the UK.

The Parent and Family Support Services in Tower Hamlets

NIHR Evidence: NEON alert
Related Projects Other projects that you may be interested in 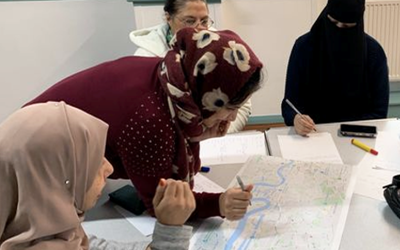